Posted by Shui Ng González
In: Reading B1, Listening or Seeing B1
Discussion of this reading exercise: 6

This reading and listening exercise is based on a song by the Spanish national football team. It is suitable for level A2 Spanish students and contains some B1 grammar points.

Yes it's that time of year again, it's the FIFA World Cup! Whether you are an avid football/soccer fan, just follow the major national games when they come round, or like to pretend you have no idea what those people are doing running around after a ball, for all Spanish-speaking countries football is something of an obsession. Spain is no exception and their national team is affectionately known as La Roja, a reference to the colour of their shirt. The song in the video below was recorded by the Spanish national team in 2016 for the Euro competition. The main singers are Sergio Ramos (one of Spain's best defenders and captain of the 2016 Euro team and also captain of his club, Real Madrid) and Niña Pastori, who from a very early age has been a successful Flamenco singer.

Watch the video, then read the transcript. Click any phrase for the translation and links to related grammar lessons which you can add to your Kwiziq notebook to practise later. Keep scrolling down to see vocabulary and study lists associated with this exercise. 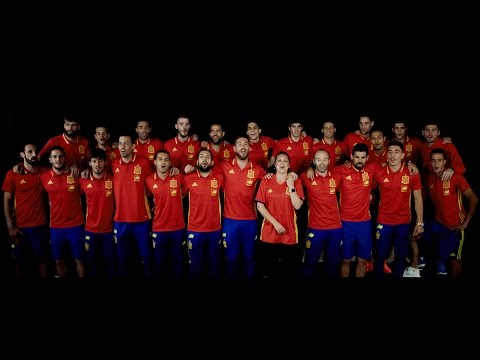 Here are the vocabulary and study lists associated with this reader:   How did you find this exercise? Will you be watching the World Cup this year? Leave a comment below!

the refrain "que La Roja juega y canta" shows as "that "The Red One" plays and dances". Shouldn't that be "sings"?
Asked 1 month ago
Like0Answer1
Share

We corrected the typo.

the refrain "que La Roja juega y canta" shows as "that "The Red One" plays and dances". Shouldn't that be "sings"?

I'm taking a wild guess that you are trying one of the dictation exercises. If so, you are given two possible steps. One is to play the spoken text right through. The second is further down the page where you get a prompt to "start the test" or similar, and then you will be given the exercise one sentence or phrase at a time, and a space to enter your translation. When you have finished the test, you will automatically be given the whole text translated.

If I have misinterpreted your question just ignore this.

That exercise is a reading exercise (a song). If you scroll down (under the video and the Vocabulary and studylists) you will see the lyrics.

Hello, I am having the same issue as Hulya.   This in reference to A2 - La Roja Baila reading exercise.   I see the video and can listen and view it, however, under Kwizig Reader there is a blank box, no text.    For me this is true for all of the reading exercises I have tried.   I believe it is a platform issue.   I logged in from another computer and it works just fine.   My primary computer is a desktop iMac.  (old)   I am running Mac OS X 10.6.8 the hardware is a 2.66 GHz Intel Core 2 Duo.  The browser I use is Firefox 48.0.2.    This is the platform where I do not see the reading text.

I am guessing that the problem is brower-related?    Long story but I don't want to upgrade anything in my iMac desktop (primary computer).    I want to preserve the music I have in iTunes at the current level and if I upgrade the OS, it will force me to upgrade iTunes to a new level and I do not want to do that.

Can you have a look at this ?